Roxanne is a woman in her thirties who has been to prison several times. We are talking in the little room that Wish uses to meet women who have been referred to our services.  She has been recalled to prison for a few weeks for a minor breach of her probation conditions. These can be nothing more serious than being late for an appointment. 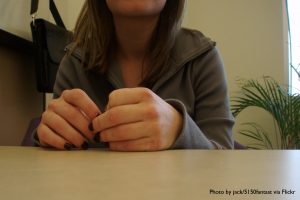 Wish is a charity working exclusively with women, providing advocacy, counselling and support services for women in prison, hospital and the community. Wish provides specialist gender specific services and has worked for 27 years in HMP Holloway and other prisons.  Wish started by advocating for women’s needs in high secure hospitals including Broadmoor 30 years ago.

The public often think that people are in prison for doing something really bad, but we might remember that some acts such as suicide and abortion were once crimes and now are not. Many women who Wish support through the criminal justice system have committed offences which are related to their poor mental health, such as calling emergency services too often, self-harming in a public place or disrupting the flow of traffic when in distress. Unfortunately, there are not appropriate services or enough services to help these women.

Many other women are in prison because of an act that they have committed for a man, such as theft, drug dealing or importation. Some women were trying to defend themselves or seek “justice” after a rape or assault where the police have not prosecuted or protected them. Abuse, inequality and gender based violence feature largely, even occasional bullying by male solicitors. Imprisonment disrupts women’s lives, their children’s and ripples out to the wider community. Why are so many women remanded for non-violent offences? As Baroness Corston pointed out in her report in 2007, most women need therapeutic help rather than to be contained in prison.

Roxanne seems despondent and resigned to being released to the same situation as previously i.e. homelessness. It seemed unlikely the prison would be able to locate accommodation for her in the last three days before her release. With no local address, services cannot be set up before release.

I have a sense of Roxanne’s potential to do well in better circumstances as she listened carefully and responded well. I feel frustrated that the system within which we are working is so restrictive, constraining our abilities to help people, and stopping people from achieving their potential in life; also, at the pointlessness of recalling a woman to prison for a few weeks, and then releasing her to exactly the same situation. What a waste of money and squandering of a chance for a woman to reach her potential.

I thought to myself “What can I do for this woman, I only have half an hour with her, is there anything I can do?”  I had never met her before, this would be my only meeting with her. What can you do when you can’t do anything?

We discussed what she was going to do on her release. I talked her through her plan A and plan B. Did she have family or friends to go to, if no hostel was found in the next 3 days? Was she going to try not to use drugs? How would she look after her mental health and emotional wellbeing?

It is not always like this. Usually there is time to meet women several times, or many times over long time periods and develop rapport and a relationship. As Justine Howard, an advocate at Wish blogged, “having an advocate who spends time getting to know a woman helps them to feel cared for and safe.” “Safe” in this context means that a secure relationship, in which both parties know each other well, allows the gentle challenging of service users’ beliefs, in the knowledge that the relationship allows them to tolerate this. Women are also more likely to take positive suggestions on board as they have confidence in our motives for making these suggestions as Wish is a user-led organisation. A longer time period leads to a greater knowledge of the women themselves, how to engage them and what their aspirations are.

However, I take the view that every interaction between Wish and a service user is an opportunity for engagement, and I am keen to make the most of this brief contact with Roxanne. In short sessions like these it is important to develop rapport swiftly, and it is better to avoid discussing traumatic experiences that service users have been through, as they are then left unsupported to deal with the feelings brought up in the session; the discussion needs to be practical. Roxanne’s openness also means we can talk through her options and make an efficient use of the time available. She makes the very valid point that it will be hard for her to try to not use drugs, if the only option for accommodation on her release is to return to a circle of acquaintances who are also drug users. There is a major crisis in housing provision at the moment.

This is the work that I do with Wish’s Community Link Project; helping women to prepare for their release and assisting them through the transition period after release. Usually there is more time to work with women and Wish can provide counselling , but at other times practical discussion of options and information as well as emotional support is what is best in a short space of time. Wish can also help women deal with the stress of their trial, the impact of their sentence and other issues such as loss and trauma.

I gave her the telephone numbers of Streetlink, Wish and a local women’s centre. I spent some time building up her sense of self-worth, emphasising her potential, that she was intelligent, young, that her chaotic lifestyle had not yet left its mark on her and that she could work towards changing her life. “If you don’t make this effort, there is no guarantee anyone else will do it for you.” This was perhaps the most useful thing I could do for her in the brief time we had together, and she went away appearing to be more positive. I don’t know what happened to her; however she has not come back into prison, which is a good thing.

I hope that Roxanne has stayed out of prison and found somewhere to live. Hopefully with people who can help and support her.
Brilliant article written by Penny.

Established in 1987, Wish is the only national, user-led charity working with women with mental health needs in prison, hospital and the community.